These awards recognize invited FEBS Congress speakers who are at earlier career stages – congratulations this year to Simon Ebbinghaus and Michael Zimmermann! 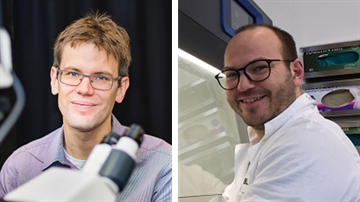 FEBS Anniversary Prizes of the Gesellschaft für Biochemie und Molekularbiologie (GBM) are awarded for outstanding achievements in the field of Biochemistry and Molecular Biology or related sciences by the upcoming generation of senior scientists, with the awardees selected from researchers under 40 years of age invited to give a lecture at one of the symposia or workshops held during a FEBS Congress. The awards comprise a certificate and €2000.

FEBS and GBM are pleased to announce that this year’s recipients of a FEBS Anniversary Prize are Simon Ebbinghaus (Brunswick, Germany) and Michael Zimmermann (Heidelberg, Germany). We hope you will join us at their talks at the virtual 45th FEBS Congress to hear about their work and see them congratulated on their awards.

Simon Ebbinghaus (left) is a Full Professor at the Technische Universität Braunschweig, Brunswick, Germany. He leads the Biophotonics Ebbinghaus group, which studies the stability and folding of biomolecules directly in cells. Although most biomolecules function inside the cell, biochemical assays and analytical tools are commonly applied in vitro, in aqueous buffer solutions. Due to its complexity in time and space, the effect of the cellular environment can rarely be taken into account when such experiments are used to interpret biological function. Research by the Ebbinghaus group reveals how different cellular conditions, such as liquid–liquid phase separation or chaperone engagement, modulate biomolecular properties in health and disease conditions. This knowledge will allow the more efficient manipulation of molecular processes in cells and may contribute to the development of novel therapeutic strategies against neurodegenerative diseases. Simon Ebbinghaus will speak on ‘Protein folding stability in the cell and its possible implication for phase separation’ at the 45th FEBS Congress, in the symposium ‘Protein Folding and Misfolding’ on Sunday July 4th.

Michael Zimmermann (right) is a group leader at the European Molecular Biology Laboratory, Heidelberg, Germany. His group works on metabolic host–microbiome interactions. The gut microbiota plays an essential role in host health, helping to catabolise otherwise indigestible nutrients, and engaging in host metabolism, immunity, brain function, and response to medical drugs. His group’s research objective is to mechanistically understand these host–microbiota interactions at the molecular level by addressing the fundamental question of how microbes recognize and transform their chemical environment. To this aim, they combine high-throughput mass spectrometry, bacterial genetics, mouse models and computational approaches to investigate the metabolic interactions within the microbiome and between the microbiome and its host. Michael Zimmermann will speak on ‘The role of the gut microbiota in drug response and toxicity’ at the 45th FEBS Congress, in the symposium ‘Immunotherapy’ on Tuesday July 6th.